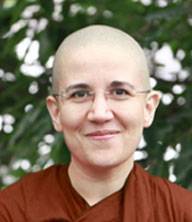 Bhikkhunī Dhammadinnā was born in Italy in 1980 and received monastic ordination in Sri Lanka in 2012. She has a background in philosophy and the classics and went on to study Indology, Indo-Iranian philology and Tibetology at the University of Naples ‘L’Orientale’ and at the International Research Institute for Advanced Buddhology at Soka University in Tokyo. Dhammadinnā obtained her doctorate in 2010 with a dissertation on the early transmission of bodhisattva and Mahāyāna ideology in Khotan. Her research focuses on early Buddhist discourses, the historical development of Buddhist meditative traditions in India, and monastic law. She is currently a research associate professor and the director of the Āgama Research Group in the Department of Buddhist Studies of the Dharma Drum Institute of Liberal Arts in Taiwan. Alongside her academic studies, Bhikkhunī Dhammadinnā has been a practitioner of meditation since 1996